A Short Note on Wild Horses and Saving Them

“A leader should always be open to criticism, to never silencing dissent, but rather applaud it. Any leader who does not tolerate criticism from the public fears their dirty hands to be revealed under intense scrutiny. Such a leader is dangerous, because they only feel secure in the darkness. Only a leader who is free from corruption welcomes scrutiny; for scrutiny allows a good leader to be an even greater leader.”  – John Cox, Cascade Mountains

The very premise of the Wild Horse and Burro Board is and remains corrupt. They break the Law on a continuous basis. There is no way, and others should be of the same mind set, that Horse Advocates who truly have the Wild Horse’s safety and life of freedom on our Public Lands in mind, would indeed neither attend nor even pay attention to such corrupt situations as the BLM, the DOI, the Humane Society, commercialized non-profits inclusive of AWHC, WHE RTF, Cloud, and many others who exploit the Wild Horses for profits – are, indeed, run by grifters, or the WH&B Board.

The significance here is the aspects of also the Pesticide and GONACON. Both supposedly a birth control. This birth control is used upon an under-populated species, the Wild Horse. When we consider the situation within its entirety, we see a couple of major points, negative toward the Wild Horse’s longevity and freedom on America’s Public Lands:

The corruption increases exponentially with what is allowed; which, equates to corruption in total. Joining the corruption does not, nor ever has been favorable toward any type of positive resolution for the Wild Horses – Look it up, it is history, and well defined.

Getting Corruption out of government, is the only resolution that will assist the Wild Horses. Anything else simply caters toward the Wild Horse’s demise – As we are seeing today if we look at the situation within a truthful, non-prejudice nor narrow perspective, we see it is simply developed from bias. We must not donate to commercialized non-profits, as their option is not the only option available, and their option does not save Wild Horses, at all — so why donate to them, as they lie, and their information based on no evidence, nor any science, at all.

To actually cater to corruption and misinformation, developed on False Pretense, not only does not help the Wild Horses – But will lead to the very extinction of Wild Horses! And this will happen much faster than ever before in the history of Wild Horse Roundups – it is much worse and much more efficient today, as well as much more misinformation to the public, false narratives entirely, is given by government and the Humane Society and oh so many other commercialized non-profits, as well.

We give our options on Saving Wild Horses and how to do so, yet these good science and management paradigms ignored — and then, the only option commercialized non-profits develop are merely, and obviously, favorable to them and the corrupted BLM only, and not the Wild Horses — in another word, Killing Horses for Exploitation, then to slaughter — all the while darting them with Toxic Pesticides that have nothing to do with “saving them” what so ever. . .

STOP THE CORRUPTION and We SAVE AMERICA’S WILD HORSES!  — Written by John Cox, The Cascades 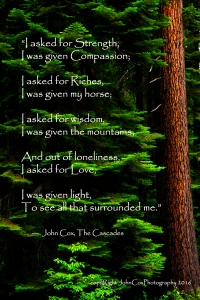 Posted by Photographer -- Journalist on July 14, 2016 in Uncategorized