RSS
← The Truth About Carrying Capacity of Wild Horses on Federal Lands: As Biology Shows Us
A Simple Moment In Time — Wild Horses →

The Department of the Interior (i.e. DOI) oversees the Bureau of Land Management (i.e. BLM).  There apparently is a tremendous situation of irresponsibility, and ongoing, within both.  Treating BLM as if they are on a foreign planet, with such unique problems as wild horses, or other wildlife, is simply similar to providing a very spoiled child with support, to become even more spoiled or in this case corrupt.

So where’s the science?  Where’s the ecology?  Where’s the evidence to support such activity by the BLM to conduct wild horse herd roundups?  Where’s the evidence for the AML counts, to even exist actually, for each HMA?  Where is the Environmental Assessments to prove, with confirmable evidence, anything and everything that BLM employees’ state as a truth, in the matters of anything about the subject of wild horses what so ever?  Why is the BLM allowed to “outright” break laws in accord with the Wild Horse and Burro Act of 1971, NEPA, FLPMA, and the Taylor Grazing Act itself which was originated to keep those involved in ranching out of the decision making process for our Federal Lands?

Oh yes, we have more and more questions, actually, every time a BLM employee, now joined with the DOI — opens their mouth, because truth is an evasive quantity with them – and yet $ millions upon $ millions of dollars apparently in their budget to support their endeavors?  Based upon lie after lie?  The biggest question – Is there a responsible adult in the room, to cover the taxpayer’s butts, from such two corrupt organizations, in the matters of wild horse recovery (in truth does not cost $ millions of taxpayer dollars – and confirmable) or ecological habitat enhancements (which cost taxpayers minor amounts of $ taxpayer dollars?  Putting wild horses back on Public Lands is good for the horses, good for the Ecology, good for the atmosphere, good for diversity needed for a healthy ecological habitat, and good for the people – the taxpayers – who pay the bill for Federal Lands.  So?

The lessons we have learned from the context of Thinking Like a Mountain (i.e. Leopold), we discover two schools of thought thrown upon our Federal Lands:

Profoundly, the determination of survival for unknown amounts of living beings (humans included), and the human species profound judgement of what is essential and what is not, captivates our wildlife, our living standards, our social atmosphere, and our entire living situation right now, upon our Earth.

What is not considered, and very important, is the fact of human survival, which co-exists with all other living beings and things upon this planet, and yet such a significant situation ignored by those who assume they know everything – about everything, and bi-damned hell or high water, they will let you know it.

These situations similar to representing one-self in court, or working on your truck when indeed, you know nothing about what it is you’re doing.  Well, we know and many more acknowledge, it is far more expensive to do it yourself in these situations, and not only cost-wise but time-wise as well.

Think Big, Think Connected, Think Whole, but, in order to do this, we must reconsider current broken BLM and DOI management of our 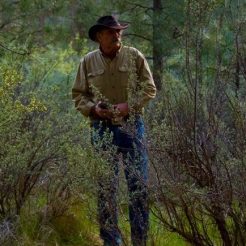 Federal Lands or the utterly broken Wildlife Management in general – for a more truthful approach.  Why do I say this?  Because we are in the biggest, and largest, human experiment in the history of this Earth.

The profound situation, is it does not matter whether you agree with it or not, because the levels of Earth’s atmosphere within “Excess Carbon” measured daily, and statistically, do exist.  You can rant and rave all you want, the deniers of such, but we are talking human survival, and not as trite as who took whose lunch out of the refrigerator during lunch break; rather, real-world problems.  Right now, not tomorrow or next year, but right now.

And as Mother Nature being my witness, to ignore these current problems, and spend taxpayer money on lies, perpetrated by such entities as the BLM, the DOI, the HSUS and their sheep-type followers, as well as others who want to profit from a very much contested wild horse liquidation-process, while they still exist, is and remains ignorantly wrong, and on many different levels.  The reality is this, we have no idea the harm that such misinformation and lies, directly involved in the matter of America’s Wild Horse Herds and taking them out of our natural habitats, will ultimately, and undeniably, conflict with our natural habitats on Federal Lands –

The fact that climate effects biodiversity is a “known” scientific result.  This is, as simple, and similar to one walking into a dark room, and using science – the light switch, to turn the lights-on.  The fact that nature is an “inconsistent” situation, and yet an alliey to the human species is of a paramount value; although, only when our conduct of use is within a positive parameter, which only then confirms our approach toward biodiversity.

Will we come to the point, within our political environment, when “Climate Change” on such a current broad scale over such a short time period, that exists right now, and ongoing denial exists also, which does nothing but produce just plain ol’ poor results, compounded with bad decisions (the killing of 100,000 wild horses – or the darting for breed control, for example – how disgusting in a supposed civilized society that this would even be recommended by a government agency — or by non-profits who step forward under the false guise of humane responsibility, that both state they represent us – neither one does, and they all need to go away) from those responsible for our Federal Lands (i.e. BLM or the DOI), soon we will simply run out of options on how to approach or resolve the current situations we have right now, when both government agencies and non-profits make the situations worse.

But, this also means if we take truth and respond in-kind to the options left for us to ultimately survive on this planet, science does show us not only plants and animals will have to migrate to better atmosphere, even though some compromise may exist – but even more costly, is the fact that “Preserves” may need to relocate as well.  With all of this at stake, one has got to consider just how wayward is the science in the DOI, or BLM, and how political agendas remain involved, or special interest, or their corruption?  Has it evolved into something totally spinning out of control entirely?

So, are we spending taxpayer money appropriately?  Well, when we look at science, and things to come, that are developing right now as we predicted, then the BLM and DOI are 100% wrong to spend taxpayer money, $ Millions of dollars, to liquidate such wildlife as our Nation’s Apex Predators’ or America’s Wild Horses – which, in a truthful reality, their wayward decisions reduce the diversity needed for any Ecological System to process itself within a healthy environmental landscape – or, what we refer to as one of many island groups, that make up the entire environmental landscape.

Designing biological corridors to facilitate this scale, as mentioned, simply boggles the mind; yet, many good scientific papers are pointing to the truthfulness of such endeavors and the necessity for continent-wide, north-south connections between protected areas.  Elevation corridors may also be necessary.  As temperatures’ warm (and become more inconsistently above and below average) and less moisture is available at low-elevations, many plants may have to climb toward favorable conditions (the EPA needs to have better leadership, rather than ignorance which is, no doubt, costlier to taxpayers also).  Or, we can simply go on, as if nothing is happening within our atmosphere, as we choke and cough up blood getting to our cars to drive to work, due to ignoring the situation, and out of just plain old ignorance – with the extreme ignorant mind-set, the political mind-set, “. . .we just don’t believe in the greenhouse effects.”

The “Climate Change” principles are also connected with protecting a sustainable system of Ecologically Healthy Habitats, as well as managing viable populations of wildlife, which also include our Keystone Predators’, our wild horses, oceanic health, and much more.

The truth is all of these are the manifestations of the same problem, at different scales of biodiversity and hierarchy.  If nature is an uncertain, if there is no balance but only a discordant harmony, then what is it we are even here for?  Are we nothing more than a blight, a mistake of attritional circumstances?  Or, are we here to be part of the whole, and function as such, rather then destroying everything around us?  What future unbiased goals may we set?

“There are ranges within life which can persist, and changes that living systems must undergo in order to persist. . . Those changes that are necessary to the continuation of life we must allow to occur . . .” – D. Botkin, Discordant Harmonies (New York, 1990), 190.

What I have outlined here is, simply, the tip of the iceberg, so to speak.  The BLM/DOI theories of Economic Ecology strategies simply do not

work, as science and data gathering approach the information, and then discover not only a lack information within both government agencies, but confirmable evidence that creates good science and good management decision making.  Lack of evidence makes the situation questionable at best, with mis-management develops (which it has and for a long time now), then cover-up continuously (costly to taxpayers), the information that shows beyond a doubt bad decision making, which is based on bad science, or no science at all – which is now costing taxpayers $-millions of dollars within its own context.

Humans cannot for long impose limited notions of order on a living world that, by its very nature, will not be pinned down.  That is the goodness of Mother Nature itself.  There exist no grounds for restricting our interactions with nature, especially to any “one” level of biodiversity.  A single-species priority is unworkable, on this planet, in total.  It just does not work! Get it?

Many ecological theories, over centuries and yes, even Waldon’s Pond to Leopold, show us we must expand healthy populations of wildlife (no breeding controls infringed upon them – which is provided by human species ignorance, and unknown to taxpayers their money also used, most often, and need we not forget the ignorance paradigm again — inclusive of them not understanding nature at all), expand existing reserves, and create more island reserves large enough to create healthy habitats. . . until that is accomplished, then biodiversity ramifications, or in better terminology – human species survival, is in reality, uncertain on this planet.  Do we in America really want this?

Posted by Photographer -- Journalist on April 29, 2018 in Uncategorized

← The Truth About Carrying Capacity of Wild Horses on Federal Lands: As Biology Shows Us
A Simple Moment In Time — Wild Horses →