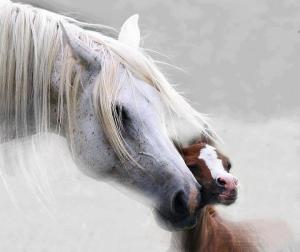 We find not only the BLM’s (Bureau of Land Management) and DOI’s (Department of the Interior) research and scientific data compromised and erroneous, but often manipulated and formed into purposeful misinformation for several reasons.  This includes the worst types of political agendas as well as bias toward less than 00.1% of the population in America.  This leads to many disturbing situations.

One situation, sadly, is the fact that Wild Horses are crippled and even killed.  Yes, the count up to this point is many Wild Horses killed.  Just as sad, the killing of the horses, during roundups (approved by outright lies combined with bad-science) and those sent to slaughter, are based on this same stream of continuous and fraudulent information.  This is what the BLM and DOI refer to as their Science or Range Management Data.  These are the types of people who manage both the BLM and DOI.

This bad-science contradicts their policy, and legal guidelines toward their methodology of assimilated scientific data.  The DOI Policy for the Integrity of Scientific and Scholarly Activities states its central policy as:

§ 3.4 Policy “The Department… will not tolerate loss of integrity in the performance of scientific and scholarly activities or in the application of science and scholarship in decision making…”

As detailed above, Bureau of Land Management (BLM) staff and Department of the Interior (DOI) staff has set aside recovery criteria and designation of suitable habitat based upon the best available science in favor of what is termed, Welfare Ranchers who acquired preferential grazing permits on Public Lands.

The policy further requires that scientific findings and conclusions be made subject to public vetting:

§ 3.4.C “ Document the scientific and scholarly findings considered in decision making and ensure public access to that information and supporting data through established Departmental and Bureau procedures…”

In this instance, Environmental Assessment documents were leaked to politicians and selected lobby groups and other friends of BLM and DOI staff and other groups. By contrast, the deliberations between BLM, DOI, WH&B Consultants, Welfare Ranchers, other groups and state agencies in the EIS, EA, or other process situations were kept behind closed door, with no public access to the scientific data until changed within bias parameter.  This information then manipulated directly relating to circumstances more profitable to Welfare Ranchers, etc, conclusions or the standard by which decisions were and continue to be made.  EIS remained corrupt, FONSI access and information either non-existent and/or corrupt.

The DOI rules define misconduct to include:

§3.5(M)(1) “Misconduct also includes: (a) intentionally circumventing policy that ensures the integrity of science and scholarship, and (b) actions that compromise scientific and scholarly integrity.”

§3.5(M)(3) “A finding of scientific and scholarly misconduct requires that:

(a) There be a significant departure from accepted practices of the relevant scientific and scholarly community.

(b) The misconduct be committed intentionally, knowingly, or recklessly.

(c) The allegation be proven by a preponderance of evidence.

In this instance, all actions by subjects of this complaint appear to be intentional rather than the product of mistake or confusion. The intricate interference denotes an acute awareness by the actors of the consequences of their actions with respect to what steps would be taken in current Wild Horse Herd Management and circumventing Ecosystem adjustments appropriately.

As detailed above, the work product of scientific experts reflecting both their collective judgment applying the accepted practices of the scientific community was variously set aside, delayed, skewed or manipulated into irrelevance by the actions detailed above. As a result, the ESA and even NEPA mandates that ecosystem management and recovery planning be based upon best available science was set aside.

The downward adjustment of recovery criteria and the exclusion of suitable habitat on the basis of political and other socioeconomic factors represent significant departures from accepted practices of the relevant scientific and scholarly community. In short, the end result of the NEPA or EA/EIS process was, and throughout the years, meant to reach a politically acceptable pre-determined result regardless of the science.

Finally, this complaint is supported by more than a preponderance of the evidence. Further, we know of no information which contradicts this narrative of events.

The purpose of the DOI Policy for the Integrity of Scientific and Scholarly Activities is to prevent political manipulation of science in precisely the manner in which it has occurred in the case of Wild Horse Herd Management planning and the Public Lands are mismanaged on a continuous incompetent basis.

The ultimate outreach of this situation is misinformed and even questionable research when accompanied by BLM or DOI research and or involvement at any level, to include college research or even other government agencies.

The biggest problem is that American taxpayers pay for all this bogus information.  When this information used, obviously ecosystems and Public Land Management suffers.  So taxpayers pay for the abuse of not only dead horses from the Wild Horse Herds, but ruined ecosystems due to poorly or undervalued plans, which then cost millions of more dollars to repair.  All BLM and DOI research and information must be re-evaluated, otherwise the taxpayers loose, again!

Posted by Photographer -- Journalist on November 30, 2012 in Uncategorized