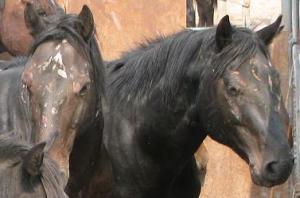 “When the people become involved in their government, government becomes more accountable, and our society is stronger, more compassionate, and better prepared for the challenges of the future.” — Thomas Jefferson

Part Two – 29 Wild Horses Killed by Bureau of Land Management And the U.S. Forest Service; to establish an Open-Debate Platform for the Public, to take part in improvement of our Government Agencies and their conduct, by demanding accountability and transparency and making Public honest and truthful information on how our taxpayer money is spent.

There is no doubt in anyone’s mind that our current government needs to have more transparency, more accountability. Not the political type, as that is contrary to reality and fraught with falsity, distasteful and hate-directed propaganda mostly. Discussed here is the responsibility aspect of accountability, and nothing more can exemplify the necessity for this than the Wild Horse Herd Roundups.

Within this aspect we have not only the Bureau of Land Management (BLM); we also pay, with taxpayer dollars, for the U.S. Forest Service (USFS) completing horse roundups as well, rounding horses up off of Forest Service Lands – which is Public Lands. This government agency also guilty of false information to complete horse roundups . . . Gone, in total, is honesty and integrity within, specifically, both government agencies mentioned.

Yes, the best example is the Transparency and Accountability in Government Contracting Act of 2007 – passed in the Senate, but ignored in the Congress to this day. There is no doubt our government agencies remain within a quagmire of incompetence, and thus lack integrity and responsibility to actually manage American taxpayer dollars appropriately. Sadly, the accountability and transparency act above had to even be mentioned, none the less ignored and demonstrating an overwhelming lack of integrity by our government officials . . . but moving onward. . .

What do we mean by integrity in the context of government? Or the circumstances of governance today that does nothing more than weaken its meaning. Few disagree that integrity is one of the qualities most to be valued in public officials. We use the notion of integrity expansively as a general, all-purpose yardstick against which to measure public conduct. Yet it is an elusive concept, especially in relation to government and government officials.

Over the past few years and within the western United States, for false reasons (the reasons well referenced and established as fact to be false) America’s Heritage of Wild Horses are being rounded up as if some type of disposable rubbish, and by BLM and USFS agencies. Their misinformation for conducting such roundups is quite lethal, not only a cause for destruction of America’s Heritage — our Wild Horses, but our wilderness areas as well.

In an attempt for accountability, when speaking with a BLM representative, this journalist was given nothing more than lies in regard to the death of twenty-nine wild horses rounded up at Murderer’s Creek, Oregon. Noticeable was the fact this BLM employee did not feel compelled toward not only any type of responsibility or accountability in the matter of being truthful, but was not intimidated by the lack of integrity obvious when answering straight forward questions in regard to transparency issues for public and tax payer information purposes.

The roundup took place not only on BLM Public Lands (25%), but Forest Service Lands also (75%). Apparently, the BLM representative and the individual In-Charge of overseeing the roundup did not realize, or knew — but did not care, that their inventory system from the roundup, detailed spreadsheets, were quite telling-in-detail of the occasion (also backed by payroll vouchers). The spreadsheets listed the outright death of these twenty-nine Wild Horses, and under the categories’ of Capture Date – Capture Herd Place – Disposition, et al . . .

Then we get to the Department of the Interior (DOI) — BLM/USFS vouchers. For this discussion we will not get into the fact, but acknowledge existence of hiring people who live within the area, as Private Contractors (relatives?), or Forest Service neighbors and friends?

Obviously these people were unqualified to accomplish a reasonable and responsible roundup — i.e. just by objective reasoning and due to the certainly questionable and highly suspect killing of twenty-nine wild horses, and many more horses simply disappeared — as facts do not lie — the paperwork obvious – or is it? Is there something else they are covering up even worse than twenty-nine Wild Horses killed, and if caught doing so?

So we read from the DOI voucher (keeping in mind this is one payment voucher of 24 similar paid vouchers, but different payment amounts given, but all approximate similar amounts) disposition that taxpayer’s paid the amount of $21,000 to roundup 20 Wild Horses (as listed on voucher Transaction #20 (Delivery Order), AG04M3C090050/AG04M3D100007/0) and the roundup, must we not forget was and remains unnecessary and generated by misinformation from both the BLM and Forestry.

Then we go to yet another voucher and another $20,000, but this time there is no amount of Wild Horses shown that were rounded up, so who knows what tax payers paid for here? Perhaps 20 more Wild Horses rounded up? And on it goes, until . . .

Keep in mind that the maximum amount of Wild Horses to be roundup within this HMA, i.e. Murderer’s Creek area, was not to exceed 200 horses. The BLM Inventory sheets already show, and paid for by the way, 258 Wild Horses rounded up. Also, we as taxpayer’s for this travesty, are not shown anywhere within the USFS paperwork where an estimated 328 Wild Horses were sent, nor their disposition, as also paid by taxpayer’s. Did they go to slaughter, and Kill Buyer’s collect the profit — so taxpayer’s paid for the roundups and the Kill Buyer’s obtain the profits? It has certainly been done before by BLM and Forestry personnel! Did they go to other reservations or rescues, or holding facilities?

Or yet another, Transaction #10 in the amount of $214,000, apparently to the Burns BLM, Delivery Order #INL12PC00123/INL12PDO1580/0 and for the Murderer’s Creek Roundup. . . Is this yet another 220 horses rounded up, or a distinct payment for something else, yet designated as going to the Murderer’s Creek roundup? Who knows, as there exists no transparency or explanation to the taxpaying public!

And on it goes, folks, and as already mentioned, a situation contrived by falsified information, lies, innuendo, and above all well referenced misleading Environmental Statements and bad science.

A government investigation is in order, you say – we all say? By who, our government that often defends this type of obvious criminal behavior, and passing it off as nothing more than information from mis-aligned advocates? Nope, this is from government documents, from the source – it is obvious horses have disappeared, in vast numbers. It is obvious there is criminal behavior within the Murderer’s Creek Roundups! Accountability? Transparency?

The overwhelming truth is, yes, taxpayer’s do pay for bad decisions brought about by bad science, make no doubt of this as being a matter of fact! Those Administrators who neglect good science simply want their budgets enhanced and their payroll increased, that’s all – to hell with America’s wildlife, and our proud heritage as well – such as the Wild Horses roaming free on our Public Lands, and within the beauty of our environment!

The least that integrity requires of a public official is that he or she not be corrupt in obvious ways: soliciting or accepting a bribe, or accepting a gift or favor in return for official action. Such conduct is generally criminal; so the added fact that it displays a lack of integrity is beside the point. So also, integrity requires that one not take some action or fail to take some action because of a perceived benefit to oneself, even if the benefit is incidental and not a reward. But again, profiting from a conflict of interest also is generally subject to criminal or regulatory sanctions.

Although we sometimes have to draw painful distinctions between what is and what is not within bounds, the principle is reasonably clear. Formal mechanisms for preserving integrity in government go no further than corruption and near corruption of this kind. There is also much conduct for which official sanctions are out of the question and which we should hesitate to call corrupt, but which nevertheless raises issues of integrity. It is also in this area that we are most in need of a better understanding.

Within the FOIA material received here last week, questions abound upon each perusal of the same material. A little integrity, add to that an amount of responsibility toward the American taxpayer’s, and thoughts toward humane treatment toward animals given, then sprinkle with a little transparency, and all of this goes away. Sometimes the simple things in life are so bewildering to those whose shroud of dishonesty has become common-place. How sad.

Humanity benefits, because there is nothing hidden, no ugly secrets that may escape for public scrutiny – Yes, life much easier with transparency and accountability – those who are responsible for the crime, are those that go to jail for the crime!

Whether or not official government policy is at stake, such conduct has become routine, simply the way public officials behave and are expected to behave. It is not, I think, because public officials individually have less integrity today than in the past. I do think, however, that what passes for integrity in government and public life is diminished. There is less expectation of honest, forthright, committed behavior, and so we take less notice when it is absent. We are used to spin, to handlers, to glib phrases and euphemisms as part of government. The likely consequences for a democratic society are not encouraging.

The Department of the Interior has become in truth, simply phrased, a corporate puppet. Money rather than our wildlife or environment becomes their decision maker – it is quite obvious good science is no longer a part of this government agency.

The saddest of all parts of this conclusion, is the fact that BLM and the U.S. Forest Service, and other government agencies, have become nothing more than part of a corporate criminal empire within our government of today. For this Veteran, and others who have fought for the stability and laws and Heritage of this country, this is a sad day for this writer to have to write this obvious circumstance onto paper. Very sad and is a let-down, our government today.

Posted by Photographer -- Journalist on May 26, 2014 in Uncategorized

5 responses to “Accountability and Transparency: Wild Horses and America’s Government”